Hello, I recently had a bridge break and the dentist elected to repair it instead of replace it. I have two major concerns... The first involves the bridge breaking. One of the end teeth on the bridge chipped off at the top edge after my latest cleaning. I'm a nervous dental patient and expressed concerns about anything like that ever happening at a cleaning and was assured beforehand that porcelain was super strong and it wouldn't break from the instruments (and then it did). When I came back in to get this looked at, I told the dentist immediately the injury to the bridge happened at the cleaning (in his office). The dentist asked how old the bridge was, and I said not even a year old! He kind of shrugged that off, but shouldn't this be cause for alarm? I've never heard of anyone's bridge breaking that fast. He said it could have been defective from firing, but that didn't stop him from charging me for the repair, of course. I want to add here that I've observed impeccable oral hygiene. The last thing I wanted was to have to go through more of this kind of work. I've done every single thing I've been told to do to care for my mouth and this bridge. My second concern is that he did a high filling in the edge of this bridge to repair it. Beyond what I've read about it being a VERY temporary fix, I have found in the couple days since that I can't floss between the end of the bridge and my natural tooth. Is this something he might have done on purpose to make the repair stronger or is it a mistake that I can't floss here? I've been using the threader up at the gum line in this area now too, but things are only sealed in that crease at the front of the natural tooth, not behind it. I worry if food gets in there I could get a cavity. What should I do about all this? He said he didn't want to redo the bridge because he was worried about causing "more damage", and to be honest, I don't want to do that either because I'm betting he's going to charge me thousands more for it, which i can't afford after already spending thousands..and I'm pretty sure my dental insurance won't cover any portion of the redo. Do I need him to look again at the filing he did? I'm getting really scared. Nothing about this situation seems normal, particularly how quickly I'm having problems with the bridge. Please help!

It is not normal for a bridge to break after one year.  Porcelain can fracture, especially if it is stacked porcelain.  This means that the porcelain is fired in layers on top of a metal such as zirconia or a semi-precious blended metal.  When the porcelain fractures off, the supporting tooth is still sealed by the metal, however it can cause periodontal issues if food or debris begins to pack in the embrasures.  Bonding filling material to a bridge, is a very temporary measure, as there is no bonding agent strong enough to permanently bond resin to metal.  If your teeth are bonded together, creating an area you are now unable to floss around, this is a cause for concern.  This area can easily trap food and debris creating a pocket for bacteria which will allow the perfect enviornment for a carious lesion to form around the bridge.  It is understandable that you do not want to cause further damage to the teeth that support the bridge.  However, more than likely the dental lab will remake the bridge for the dentist at little to no cost.  The bridge can be cut off to reduce the stress on the supporting teeth in order for a new impression to be taken and a bridge to be fabricated.  You invested time and money into your restoration and should be satisfied with the treatment you have received.  Explain your concerns to the dentist and hopefully he/she will understand and want to continue to have you as a patient in their care. 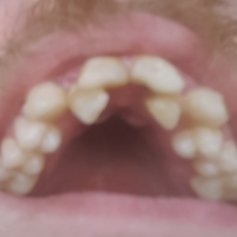 hi im looking for the cheapest way to straighten my top teeth i have straight front 2 teeth but my teeth ever side are behind my front 2 teeth and my fang teeth are also out of line have attached photos i am happy and willing to have teeth removed...

What is the best prosthesis for speech purposes?

This question is asked on behalf of speech for actors/ presenters/ performers/ and public speakers who are dealing with loss of upper right 2nd premolars. Can you please rank the best prosthesis based on comfortable tongue movement for articulate...

I have had a gold Maryland bridge for 30 years, teeth 29-31. 31 is the full crown. I am having sensitivity in and around 31 and cannot chew on it. What treatment options do I have? It seems such a waste to remove the entire bridge. I am 62 and...

Hello, I recently had a bridge break and the dentist elected to repair it instead of replace it. I have two major concerns... The first involves the bridge breaking. One of the end teeth on the bridge chipped off at the top edge after my latest...

Will a bridge hold on the front

I'm miss four teeth on the right side of my mouth (the front tooth is still there). My doctor said I need 4 implants, which I can't afford. I went for a second a opinion. He said that I can get a bridge, because the two end teeth are there. One...

Should I be in this much pain after a bridge placed?

I am 30 years old, no health problems. I have had several fillings throughout the last several years d/t not taking care of my teeth as a kid. I also had invisalign for 2 year which I finished last year. I wear a retainer at night. I have a high...

Which is better to replace a bridge now over 3 teeth- a longer bridge or 2 implants.

The teeth referred to in the title question are in the upper left portion of my mouth on the side but towards the front. I have been told that I need either a long bridge or 2 implants to replace a bridge that has to be removed in order to...

What is an acceptable range for a gap under the pontic on a bridge?

I recently had a bridge placed on my upper jaw and the gap under the pontic is large enough to pass a toothpick through easily(food constantly gets trapped there), it seems excessive to me, what is the normal range of gap under the bridge? Another...

Is cerac suitable for a replacement bridge?

My dentist has the facilities and eperience to make same day Cerac bridges with all work completed in his office. My original bridge was made in 1952 and has been replaced 4 times It must be replaced again due to a cavity in an open margin in...